What do Paris and Invercargill (NZ) have in common? Very little so imagine my surprise when Damien published  a photo-post from Paris  and there was something I could relate to – a patisserie with an eerily familiar name. Familiar that is, to the name of a pie shop in Invercargill!

Now dear reader, excuse my ‘french’ but the common element here is the word bastard. I couldn’t imagine how a patisserie in Paris came to use this term in their name and asked Damien if the owners are French. They are. To me this seemed misplaced – such usage would typically be Australasian.

Here’s Damien’s photo of the patisserie (cropped by me). Fyi he blogs at:
Deuxiemepeau Poetry by Damien B. Donnelly

Click on the photo to see the un-cropped version.

Note: the word bastard is used in a very casual way in NZ and one doesn’t think much of it. Someone might say of a mate that the person is a good bastard. I would assume the person referred to might be a bit of a ‘character’ but that they’re okay. On the other hand if I heard that someone is a mean bastard that’d infer that they’re not nice to know.

Mike Powell  joined the discussion, offering the answer to the mystery and making me laugh out loud. The humour may be lost on those who aren’t kiwi or aussie.

Mike’s response:  Here’s a link to an article that I found about the French Bastards (https://www.davidlebovitz.com/the-french-bastards-paris-bakery-pastry-patisserie-boulangerie/) . According to the author, here is the reason for the bakery’s name – “Their unconventional name comes from when one of them, Julien, worked in a restaurant in Australia. He was so talented and worked so well that the chef (affectionately) referred to him as “the French bastard.” So he and his friends decided to use it to name their bakery in Paris.”

The above link is a great read with beautiful pictures of the food, and ‘The French Bastards’ turn out to be three long-time friends named Julien, Emmanuel and David.

— remember NZers have a very irreverent sense of humour

If you follow the website link you’ll see the Mayor of Invercargill with his trademark grin about to eat a Fat Bastard pie. The writing alongside him quips: oh hello. Welcome. You fat bastard.

I laughed myself silly the first time I saw it 🙂 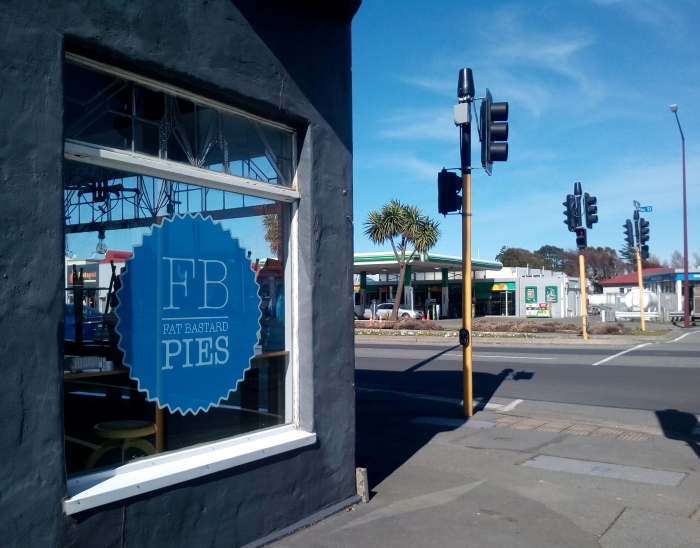 And on the opposite corner from Fat Bastard Pies?

My favourite church building in Invercargill. 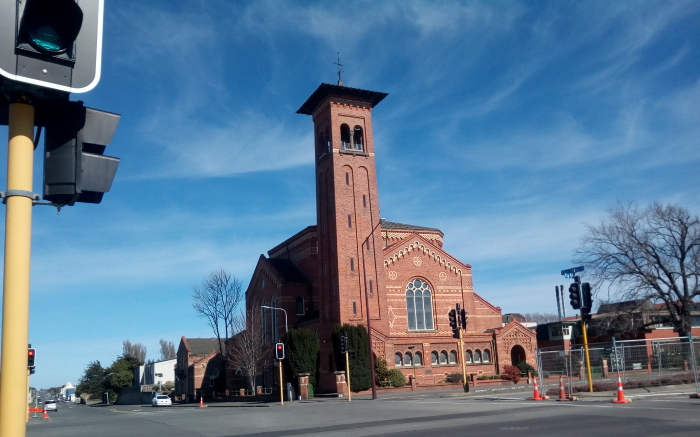 It’s time to head home but before we pull out from the kerb, look at all these New Zealand cabbage trees in the median strip.. I love them!