When wandering around Dunedin on 21 May 2018, I came across this rather faded looking mural on a wall facing the Scenic Circle Southern Cross Hotel carpark, just off High Street. It didn’t make much sense to me and I found it a puzzling artwork. I did a search and found it was painted in May 2015 by Polish street artist Bezt. I’ve also found the answer to why I found it so puzzling – I’ll explain after the photos. 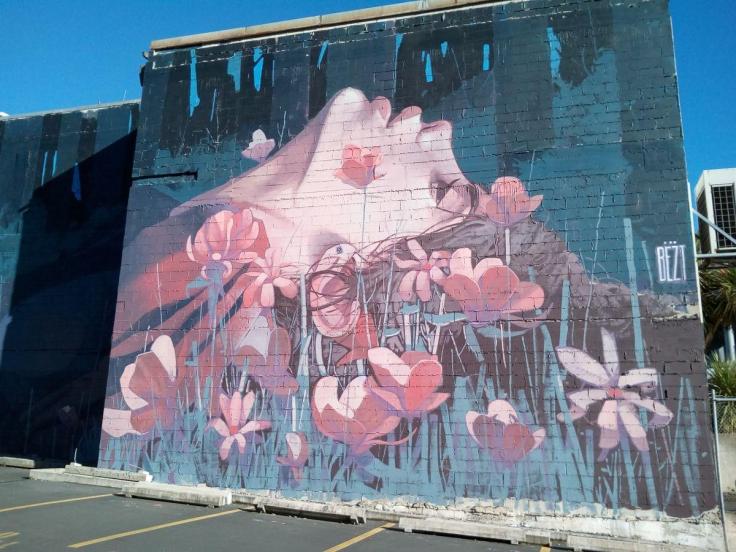 The little bird below is our native fantail, an exquisitely cute little bird that flits around constantly on the hunt for flying insects.

But I couldn’t understand why the girl’s hands are positioned as they are (above).

Close-up of the artist’s signature part of the mural.

After reading about the mural online I found Bezt had originally planned to paint a man waiting in a bar and holding a bottle but when he saw the wall he decided to paint something different. He painted a woman lying on the forest floor clutching arrows protruding from her stomach. While the Council was processing the new consent a couple of complaints were received so Bezt was pressured to change the mural; the arrows were removed and the fantail added. Read the full New Zealand Herald article.

The title of the artwork is When The Hunter Becomes The Hunted. If you click on this link you’ll see photos of what the original painting with the arrows looked like.

I’ve previously done a blog-post on another mural that’s in the same carpark, directly opposite, painted in Feb 2018. Its a fascinating mural by Jacob Yikes from Christchurch. See Cartoon Surrealism