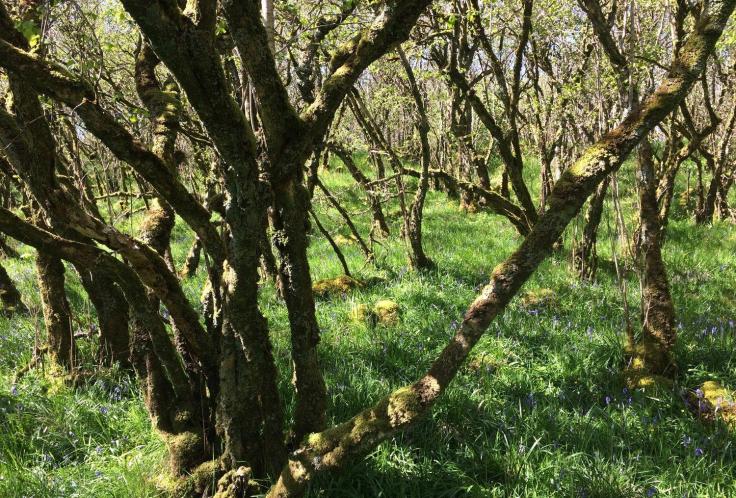 On this glittering May morning the sunlight bounces off the sea loch in bright fractal patterns. In the foreground sedge and grasshopper warblers natter and reel in the rushy pasture while a cuckoo sounds off from the top of a nearby rowan. Between the two, about half a mile away, is rocky ridge covered in low hazy woodland. That is what we have come to see.

Elen and I have travelled to the Isle of Seil in Argyll specifically to find Ballachuan wood, a Scottish Wildlife Trust reserve, which is one of the very best of Scotland’s mysterious hazelwoods. We follow a track across the rough pasture and climb a stile into the wood. Straight away it seems odd. This is one of Britain’s most ancient woodlands and yet it is no more than twice my height at best. Around the edges there are a few other tree species, a wych elm and a group of wild cherries humming with bees, but further in there is only an even blanket of low growing hazels. This early in the season the wood is light and airy, with a rich ground flora in full bloom. A hazy carpet of bluebells is just beginning to open and scattered amongst them are sanicle, golden saxifrage, wood anemone, enchanter’s nightshade and sweet woodruff. Here and there early purple orchids glow like light sabres amongst the wild garlic. As we duck between the hazels following a faint path I am struck by the fragile ‘other worldly’ feel of this place. It is as if we have been dropped into an alternative reality and I am reluctant to step off the path for fear of doing irreparable damage with my alien feet.

Hazels are familiar shrubs in lowland woods and hedgerows all over Britain. Historically they were usually coppiced, periodically clear-cut, for the multiple slender and flexible stems they produce which were so useful in the pre-industrial age for baskets, sheep hurdles thatching spars and the like. For many years I assumed that hazels were multi-stemmed because they had been coppiced, although it often struck me as odd to find them like that in very out of the way places. It turns out that left to their own devices they are a naturally multi-stemmed species; in fact hazels can persist for hundreds of years by replacing old and dying stems with new ‘whips’. A researcher in Finland has found living hazel stools he estimates to be more than 900 years old. Consequently where there has been little interference over the centuries and climatic conditions are suitable hazels have formed self-perpetuating woods that can persist indefinitely, without any ‘encouragement’ from humankind. And it seems that these hazels at Ballachuan have not been significantly exploited since they first colonised this rocky ridge following the retreat of the glaciers 10,000 years ago. What we are looking at is almost entirely natural – a rare sight in twenty-first century Britain.

Another striking thing about these hazels is that they are festooned and plastered with lichens. On the younger stems smooth crustose species form cream and silver patches; on the older stems there are ‘leafy’ species, some of them cool and fleshy to touch. I am not a lichenologist but I can recognise a rich assemblage, and I have never seen anything like this before. Such an abundance and variety only occurs in very old and undisturbed woodlands, where there is a moist and equable climate with very little atmospheric pollution. The air here must be very clean. Even quite spindly hazel branches are covered with tree lungwort (Lobaria pulmonaria); it is everywhere, dried out in this weather to gruesome parchments resembling inverted lungs. Grey beards of Usnia species hang down like wispy goatees and ‘script’ lichens are inscribed with indecipherable codes of dots and scribbles. It all seems so delicate and precious and yet this wood must be very resilient to have survived here for so long.

Until comparatively recently ecologists had not placed any particular value on hazelwoods, they were generally thought to be a stage in the development of other common woodland types rather than an endpoint in themselves. Then in the 1970s two lichenologists, Sandy and Brian Coppins, began to realise that the lichen flora of some Scottish hazelwoods was particularly rich and distinctive, including some species that were globally rare. Although pioneer hazelwoods occur in various places on the Atlantic fringe of Britain they discovered that the most special lichen communities were confined to pure hazel stands that had remained undisturbed for a very long time. These so called ‘old growth’ Atlantic hazelwoods are more or less confined to western Scotland and are home to some of the richest assemblages of oceanic lichens in Europe. Along with oak and birch woodland found along the edges of western Britain they are part of the ‘coastal temperate rainforests’ of the world, an extremely rare and threatened habitat type. As well as lichens these woodlands are also important for mosses, liverworts, fungi and ferns.

Ducking amongst the hazel branches we scrambled along a now barely visible path, following a shallow stream right down to the seashore where its gravelly bed widened out into a small bay swaying with bladder wrack. A common sandpiper, startled by our arrival, flew off, piping loudly on characteristically stiff wings. The hazels above the rocky shore were wind pruned to no more than waist height. A scattering of alders, birch and sallow infiltrated them at the edges but it seems that thin soils, maritime exposure and the tight canopy of the hazels prevents these taller species from ever colonising the wood.

I had expected a grimmer place swirling with Celtic mystery, and no doubt on a wet day in February it could seem that way, but today it smacks of intoxicating enchantment; perhaps if you slept the night here you would wake up altogether changed. This extraordinary wood is probably a living relict of the original ‘wildwood’ that has persisted essentially unaltered since it colonised the post glacial tundra 10,000 years ago in a Britain where humans were of no significance. It is indeed a message from ‘beyond’.

NB:  This is a reblog of  Hazelwood  by David from dispatches from the undergrowth. The original post was dated 27 July, 2018.

From David’s About page:  David is from Bala, North Wales

Bio: I am a naturalist and environmentalist with a deep concern for the appreciation and conservation of our wild plants and animals. I spent much of my career in national parks and nature reserves working for conservation agencies. I want us all to care more about nature in the quiet-nearby.

Note from Liz: Click on any horizontal image above to view a large-size version. If you want to view in very large-size then you’ll need to visit the original blog-post where the images range from 1-3MB.

Reblogged by Liz as part of the “Where and What is Beauty? Series”;
Exploring Colour (2018)