Have you seen the ‘Corpse Flower’? Earlier this year in our summer, at the end of Jan/early Feb, an Amorphophallus titanum at the Dunedin Botanic Garden flowered – much to the excitement of Nigel and I! We popped into the glasshouse every chance we could to see its progress and it flowered JUST before we were scheduled to move house to Gore on the 5th of February. Nigel took the last photos of the fully open flower on 04 Feb.

The following two photos were taken on 29 January and the outer sheath is coming away from the flower. 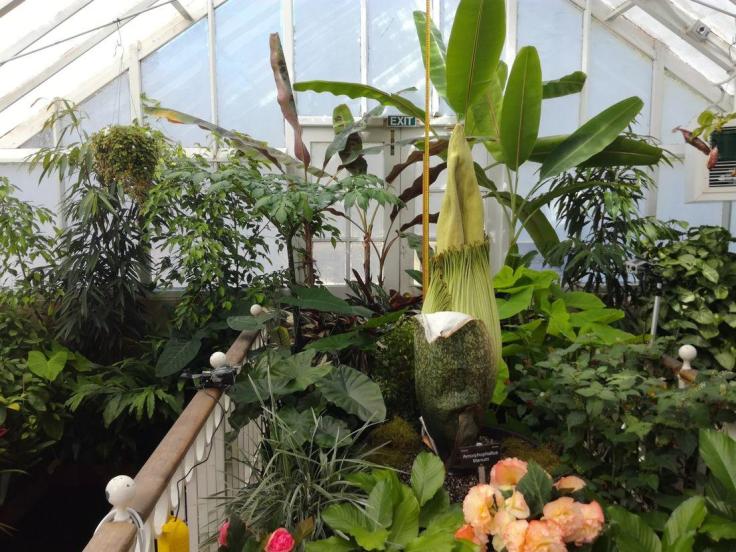 I have read that Amorphophallus titanum translates as “giant mis-shapen penis”.

– the outer sheath had completely fallen away, leaving a clean stem.

Indonesians call the plant ‘the corpse flower’ due to the terrible stench when the flower is ready for pollination.

According to the Eden Project this is “the largest flowering structure (inflorescence) on Earth, growing up to three metres tall” (link below).

Next photo: This information was displayed early on before it was known whether the bud sprouting up from the tuber would be a flower OR a leaf. This was a matter of much speculation in the early stage!

Here you can see what a bud can grow into – click on photo to enlarge.

The tuber can weigh more than 75kg and from Kew Science (link below) I found that a tuber had been re-potted at Kew in the winter of 2004 “which weighed an astonishing 91kg”.

Text by Liz and Photos by Nigel; Exploring Colour (2018)

26 thoughts on “Titan Arum: Part One”