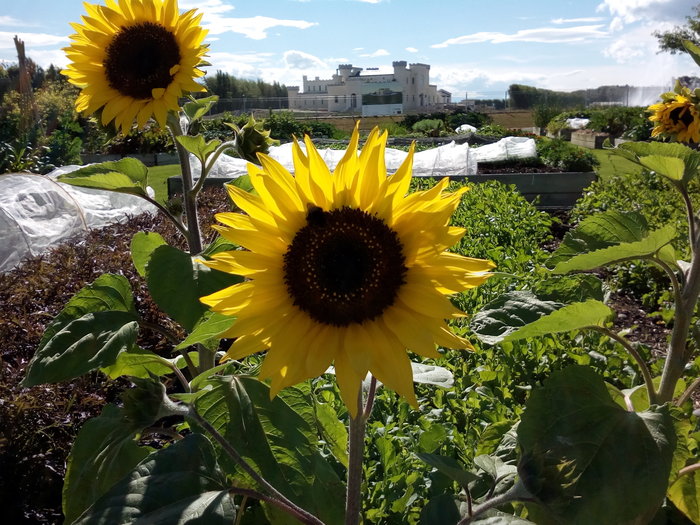 This story begins with COLOUR. Yesterday, driving home from Kurow, we’d driven through Waitaki Bridge and were on our way to Oamaru. Suddenly in front of us was a big sign for Riverstone Kitchen. My excitement knew no bounds… I’d long wanted to visit this place! Both of these photos were taken from their car park.

No “Castles in the Air” here… but there is a REAL Castle!

Dot Smith is a lady who loves colour, especially pink. She has pink hair and she wears pink. And Dot dreams big!  She held on to her castle dream during many years of dairy farming and now her real castle is close to completion!

After enjoying a late afternoon tea in Riverstone Kitchen, we unexpectedly came across Dot while we were exploring the vegetable garden. She’s not just a great dreamer but also a great do-er. Here she was, dressed in pink and energetically watering her garden with an enormous blue hose. I was so excited to meet this amazing lady who dares to be bright, loves pink, and has realised her long-held dream of building a castle!

Dot very kindly allowed me to take her photo while she was busily engaged in watering the garden and so I can introduce Dot Smith to you, at least in this photo…

I’m not going to spend ages writing about Dot’s story – her story has already been told by herself and others (see Further Reading below).

But I’ll quote this paragraph from a NZ Lifestyle Block article:

When she was living in what she calls a grotty old house in Warkworth, Dot dreamed of one day building a castle. “It was a dream, but why not? Everybody loves a castle. I’m creating a million stories!” Unlike most, Dot retained her childhood dreams and has now realised them. When the time came to build their own home, instead of down-sizing to a “little cottage by the rest home,” says Dot, she and Neil decided to build a castle.

The article title is “How pink-haired Dot Smith made a vege patch in a garden with no soil“. Its a good read with plenty of photos and you can click through to it HERE

So yesterday for the first time I got to see Riverstone Castle, which appears to be almost completed, and it was everything (and more) than what I’d hoped for! 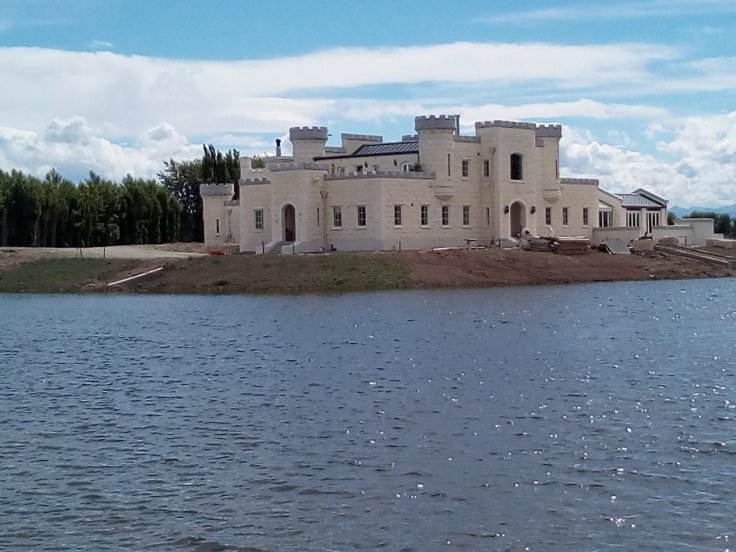 Oamaru Castle and its pink-haired owner Dot Smith appear in local doco. By Sarah Nealon and last updated on May 30, 2017. News article with a couple of good photos.

DOT Queen of Riverstone Castle by Dot Smith. Book. I read this a few years ago and hope to read it again soon. I remember it being a very interesting read.

Text and Photos by Exploring Colour (2017)